As I watched a car drive across three lanes of traffic on the freeway, onto the exit ramp and out of sight, doing approximately 20 miles per hour above the speed limit and without displaying any signal I mused on the different styles of driving I had observed in various parts of the US.

For instance, when I first moved from Dublin to Austin Texas, I was charmed by what I thought was good manners and patience, for I never heard a horn honk no matter what the traffic situation. Then I was told that no sensible person in Texas honks their horn for fear of being shot! 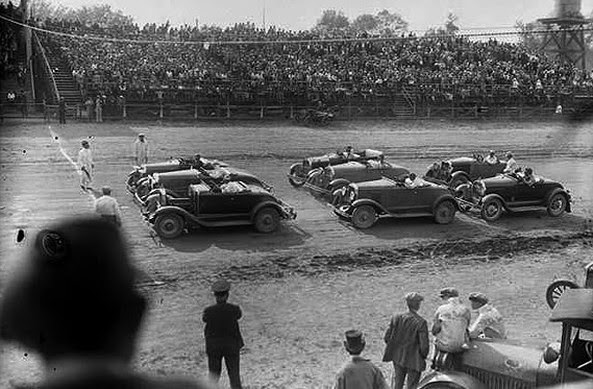 My opinion is that Texans all drive like they believe they are in a NASCAR race. In fact probably more like those drivers who were the originators of NASCAR - bootleggers. Driving fast, showing no lights and lightening changes of direction with minimum indication of intention, and no consideration for other drivers. In fact, I have long believed that the drivers in Texas take the attitude that if you ignore it, then it is not there. They do this with other drivers, snow, ice, rain, you name it, they ignore it. Except of course, for slower drivers in front of them, then they herd them out of the way like the cowboys they are, getting as close as they can without actually pushing the slower vehicle off the road, though I have no doubt that is what they would like to do.

New York drivers and Dublin drivers are very similar - I guess in part because Dublin traffic and New York traffic problems are similar, but also perhaps, because there are so many Irish in New York? Lots of honking, yelling and hand gestures but very little movement.


In the San Francisco Bay Area, where drivers are subjected to long lines of slow crawling traffic, a gap wide enough to change lanes is very rare, they appear to have developed the uncontrollable need to change lanes if that gab does appear, I swear they do it because they can, irrespective of whether or not they need to be in that lane. Perhaps they think that a gap in the traffic means movement and any movement is better than none, even if the are only moving sideways and not necessarily in the direction they want to go. 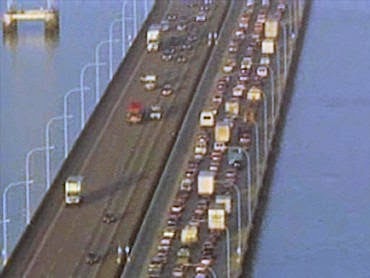 I used to ride a motorbike in the Bay Area, where it is legal for motorbikes to drive between the lanes of traffic, and useful because these lanes are usually stationary. More specifically, I rode my bike across the San Mateo Bridge, which is usually at a standstill during rush hours. However I did learn very early on to be aware of this sidewards movement. As I drove, I watched for gaps and slowed down because it was inevitable some driver would dart sideways into the space.

In Seattle everyone is so incredibly polite! Drivers stop for pedestrians of all sorts, from hurrying commuters, old ladies, homeless people pushing carts, mothers pushing buggies, dogs, cats, squirrels, the WA drivers stop, smile, wave and wait patiently. No one has to wait very long to move into traffic or change lanes, they all signal their intention, and everyone stops and waves, most of the time taken to maneuver in traffic is the time it takes to demonstrate gratitude.

Next time I am traveling I must make a note of driving styles.

Posted by Aideen at 7:35 AM No comments:

I thought I suffered from Restless Leg Syndrome (RLS) before it was discovered, but actually research shows it was discovered way back in the 1600s. But I did suffer from it before the medical profession paid any real attention to it - or maybe that is before the pharmaceutical companies realized there was money to be made from it? Definitely I only started hearing about it when various magical cures were being advertised on TV in the '90s. It was kind of a relief to discover that it was not my imagination and the condition actually has a name.

As a teenager, if I got really tired, my legs started feeling awful - it was like an itch deep in the bone almost. Back then I was OK once I went to sleep. But as I got older it got worse. By the time I was in my late 40s it started to invade my sleep. Once I woke up with my legs twitching, I usually had to get up and walk around to stop it, then of course, I was awake and sometimes it took me over an hour to get back to sleep. Occasionally if it is not too bad, just sticking my legs outside the covers so they get cold will work. Later I started waking intermittently during the night despite the fact that my lets were quiet. It wasn't a big problem as I was able to fall back to sleep almost immediately.

Then I was put on medication to help prevent bone loss - a drug called Evista - I wasn't aware of the fact that RLS was a known side effect, in fact the only way I found out was my RLS got much worse and I was getting only 5 hours of broken sleep every night, frequently having to get up and walk it off more than once every night. Then, on a trip home to Dublin, when I was sleeping for 8 hours, if still somewhat broken sleep I was not suffering from RLS at all, I got to thinking about it, apart from being in Ireland, the main difference was that I had forgotten my medication and didn't take any Evista the entire trip. I stopped taking that medication and started sleeping better.

I was still having the occasional bout of RLS but not nearly as frequently as before, and of course I was still waking 4 or 5 time during the night - and still do.

It was only when I started reading up on RLS for this blog that I think I figured it out. RLS is just one symptom of a disease that interferes with sleep.

According to Healthline.com RLS was initially documented in the early 1600s by Thomas Willis :


...Willis’ description of RLS: “Leaping and contractions of the tendons and so great a restlessness and tossing of the members ensure that the diseased are no more able to sleep than if they were in the place of the greatest torture.” Ironically, Willis thought the cure for RLS was bloodletting, which was used for everything from rashes to cancer in those times. However, today we know that low iron levels contribute to RLS and bloodletting was the worst possible treatment...

A study in 1996 showed that after patients sought medical help, diagnosis took 10 years or more. An international study in 2004 found that only 8 percent of patients were diagnosed properly. This article also confirmed something I had already figured out for myself, any medication that eases the symptoms only does so for a limited time especially if taken regularly. I found an over the counter drug called Legatrin which did help for little while, but soon it stopped working. I now only take it once a week, generally Friday or Saturday night, when I know that I don't have to get up in the morning. I don't sleep in, I haven't done so for as long as I can remember, but I live in hope and I do get at least one good night's sleep most weeks.

The fact that RLS is a symptom fascinated me. This report from Johns Hopkins was the one that I found most fascinating as it pinpoints higher levels of glutamate in the brains of people who suffer from RLS - glutamate, the report explains, is a neurotransmitter involved in arousal - that is not referring to sexual arousal, it refers to arousal from sleep - to be awake. Suffers of RLS get less sleep, suffer from broken sleep and tend to not be overly tired during the day despite that.

Now.. I have read a number of articles that tie lack of sleep to difficulty losing weight, or even to weight gain.

According to the Annals of Internal Medicine Journal, a study conducted by the University of Chicago Sleep Research Laboratory concluded:


Sleep curtailment decreased the proportion of weight lost as fat by 55% (1.4 vs. 0.6 kg with 8.5 vs. 5.5 hours of sleep opportunity, respectively; P = 0.043) and increased the loss of fat-free body mass by 60% (1.5 vs. 2.4 kg; P = 0.002). This was accompanied by markers of enhanced neuroendocrine adaptation to caloric restriction, increased hunger, and a shift in relative substrate utilization toward oxidation of less fat.

The amount of human sleep contributes to the maintenance of fat-free body mass at times of decreased energy intake. Lack of sufficient sleep may compromise the efficacy of typical dietary interventions for weight loss and related metabolic risk reduction.

I am overweight despite my efforts to diet and exercise, I have RLS and I sleep very little, and I sleep badly as I said, waking frequently throughout the night, because I higher levels of glutamate!

Fascinating, but I am still fat, my legs still twitch and I still don't get enough sleep, however, somehow I feel a little bit better about it all.