It is now a full year since I last drove a car, had my hair cut, had a manicure or pedicure, had a massage, worked in the office, met with my direct reports in person, hugged my children, hugged my grandchildren, eaten in a restaurant, had a drink in a bar, been to the dentist, had an allergy shot, flown in a plane...the list is extensive; I also have not had COVID-19 .. yet.

Two weeks before Amazon issued a 'work from home' recommendation, I decided that it was not just unsafe to go into the office, it was foolhardy. I told my husband I was working from home for as long as this epidemic scare lasted and we cancelled a trip to visit my son in Seattle for his birthday; before long it was declared a pandemic and we were looking at 6 months of working from home.

At that time, we were living in a large house which we had purchased in order to have suitable accommodation for my mother in law to live with us. She had very high standards, she required a large master suite on the ground floor. Obviously we wanted a master suite also, though we were prepared to compromise. That is another story and I won't go into it now, but in December 2019, without warning my MIL announced that she was moving into assisted living. Apparently she had been working on this idea secretly with her other son and his wife and within two weeks of telling us, she was gone - the week before Christmas, we still don't know why she took a turn against us and now we never will know what we did to upset her so much. So in early March 2020, there was no reason for us to still be living in that huge house. We had purchased a condo on the lake, for weekends but with the eventual plan to retire there. Now there was nothing stopping us. I wasn't retired, but WFH was pretty much the same thing.

After a few weeks living full time in the condo, we started talking about selling the big house, and we started taking the minimum of items from there to the condo; we were in no hurry. Months went by and the WFH was extended. I realized that my car had been sitting in the garage for 6 months, untouched. We traded in my car and my husband's truck for a new truck. We sold the house, complete with most of the furniture as the condo was already fully furnished and just like that, we were downsized and gazing out at the lake every day - not to mention regular fishing trips at a moments notice, outside working hours of course. And 6 months WFH became 12 months and still no sign of getting back to normal. 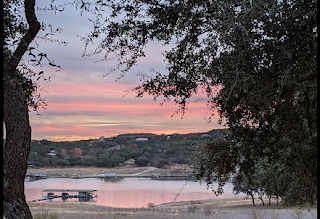 As the vaccine rolls out, very slowly in Texas, the pandemic continues to rage and we wait patiently for our turn to get that promised protection. As I write, we are already eligible but can't get an appointment anywhere. And our incredibly stupid State Administration decides to open up the State 100%. I am so horrified, because of course there are thousands of people in Texas who don't believe in wearing masks, they do so only because they can't get into a store without one, but many remove them once inside. 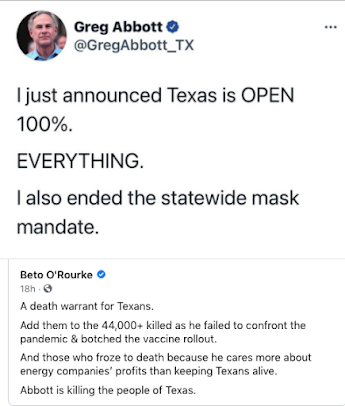 It will just be a matter of 3 weeks and Texas will experience another huge wave of COVID-19 cases, hospitals overflowing and deaths rising, particularly with such a low percentage of people vaccinated. We are locking ourselves down and hoping for the best.
Current status: 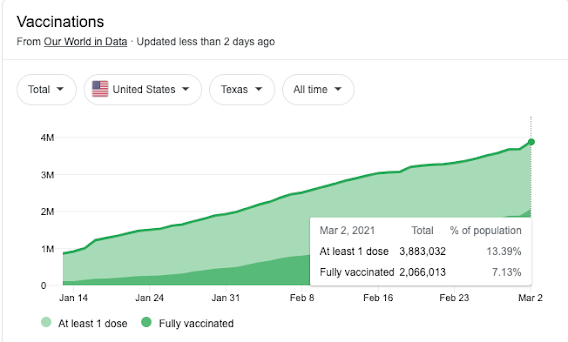 Posted by Aideen at 1:04 PM No comments: