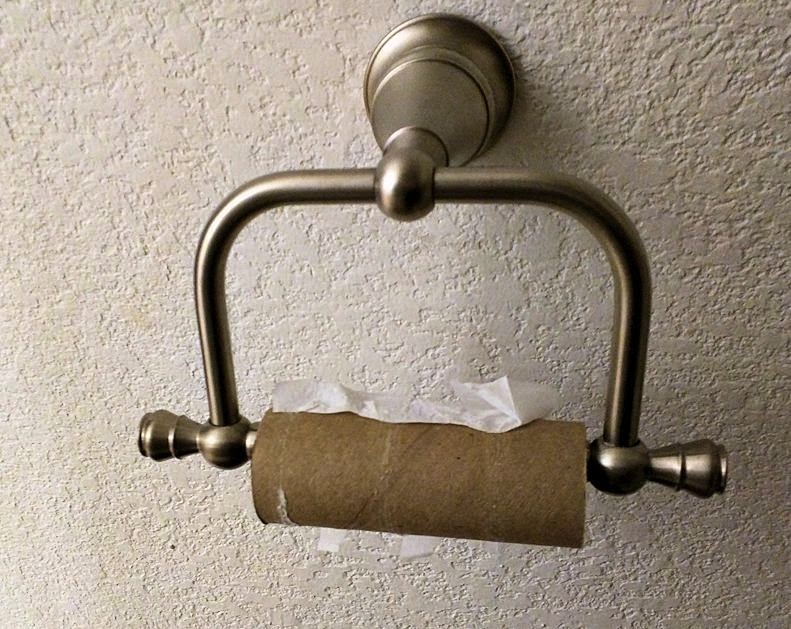 I bring this up because I am guilty of feeling hard done by when I find just an empty cardboard roll and I feel that I am the only person who replaces it. I do feel strongly that to use the last of either roll and just walk away without replacing it is just plain inconsiderate.


Then there is the 'almost' replaced roll. The empty cardboard roll hangs on the holder, but someone has found sufficient energy to place a new roll on top of it, just couldn't quite muster up that extra effort to put it on the roller - or, they manage to get that far, but can't quite figure out how to dispose of the empty roll - goodness knows the Internet is cluttered up with whole websites dedicated to things to do with empty toilet rolls. Pinterest has 1001 ways to use them! 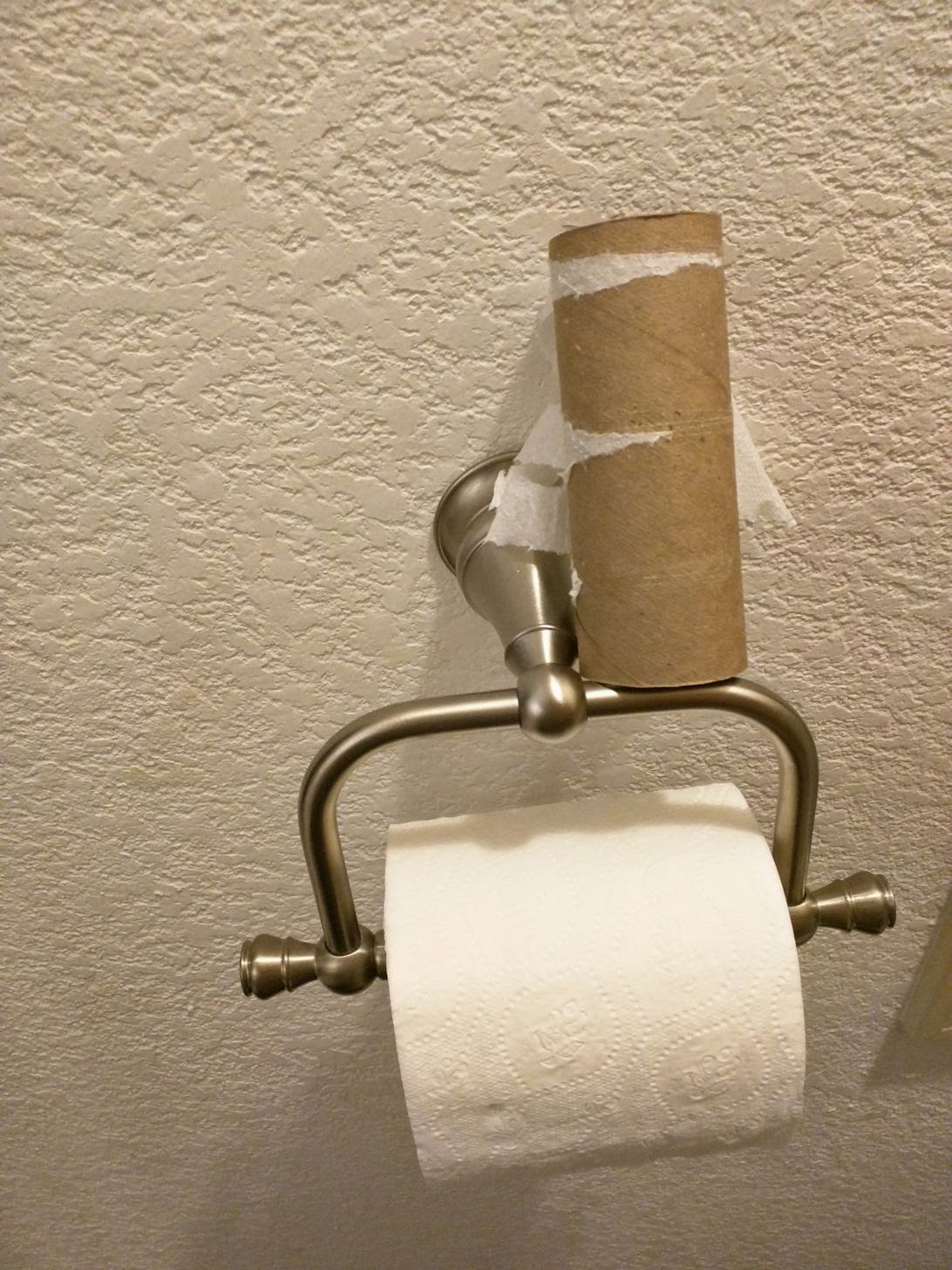 I know for a fact that I am not the only person who replaces either roll. I have actually seen my husband replace the paper towel in the kitchen, and I frequently find fresh, untouched toilet paper in one or other of our bathrooms, leading me to believe that someone other than myself, replaced it.

But yet people do complain when they have to replace a toilet roll, mind you, once replaced that opens up another can of worms - was it replaced correctly? There is a wiki dedicated to toilet paper orientation.

In our house, there is a right way and a wrong way to replace the paper towel in the kitchen also. Of course you probably read my blog entry on how to stack a dishwasher? There are numerous other everyday tasks that have a 'right way' and a 'wrong way' to complete. My husband blames this on the fact that we were both born in September, and everyone knows that Virgos are perfectionists - he says this in almost the same breath as declaring that astrology is something that he does not believe in.

On the left is the correct way to do it, on the right is incorrect. 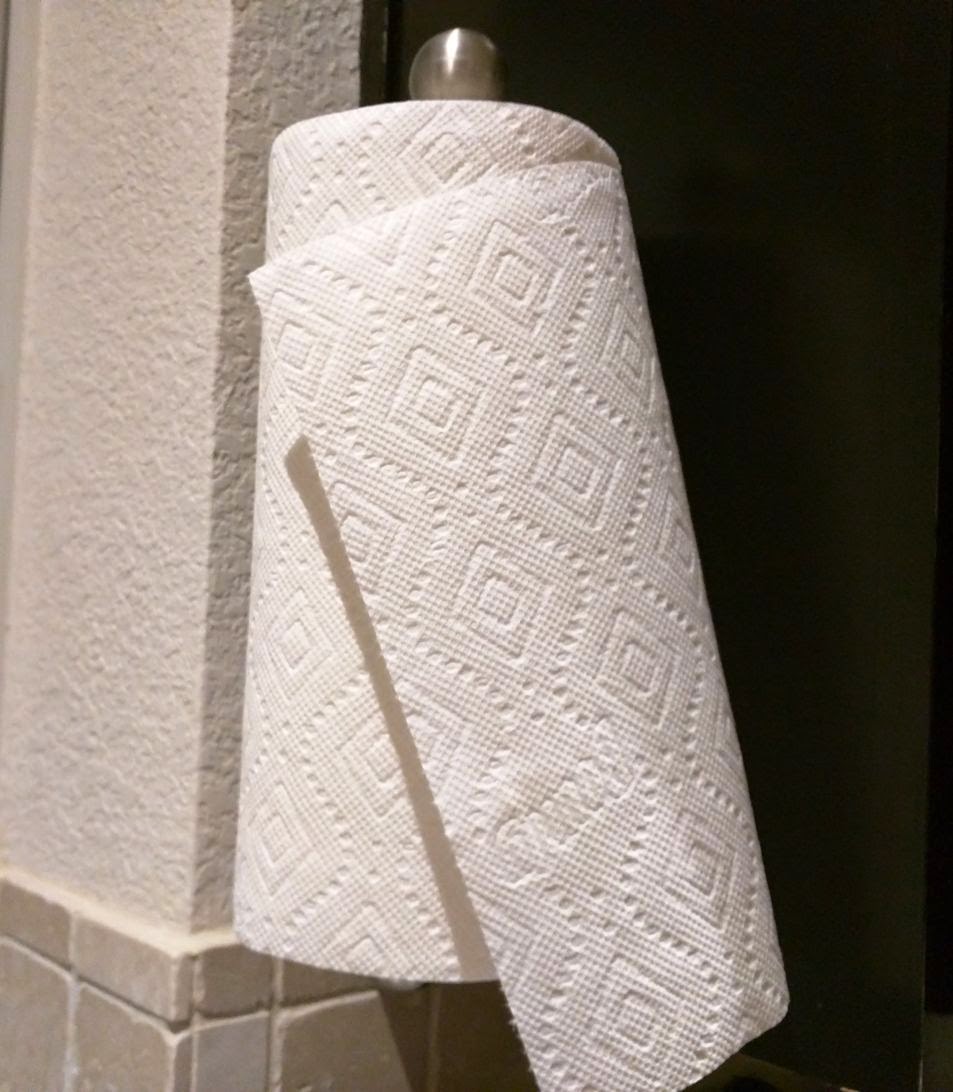 One of the other things about toilet paper that I find strange is the folds that hotel cleaners put on the roll - our cleaning service does it too and I always feel a bit mean tearing their careful fold off, in fact I sometimes think perhaps I should refold it when I am done? I wonder what they would do if all of our toilet rolls had little folded points on before they even started cleaning, would it ruin their day?


A quick google search turned up some interesting methods suggested to combat the empty toilet roll issue. Personally, I think it is a losing battle and I don't care to waste time fighting against the inevitable - so I resolve in the future to just replace the roll and get on with more importing issues.

But the irritants don't end with paper rolls. There is the habit some have of putting empty containers back in the fridge or on the pantry shelf. Leaving cabinet doors open, putting just one too many pieces of trash in the bin and still not emptying it, so many others I am sure.

Posted by Aideen at 4:15 PM No comments:

I was explaining to a colleague why I was sitting at my desk chatting with him, at 5 a.m. CST (my time in Texas) which was 3.30 p.m. in his location, Bangalore.

I start work between 4.30 and 5 a.m by choice, because I wake naturally around 3 a.m. every morning, frequently a little earlier. Starting early also means I can finish up early, most days, and I get to miss most of the traffic.

It has been years since I heard an alarm clock and while I will try to sleep in until 4 or 4.30 a.m. at the weekends, if I can - I will always wake around 3. Even when daylight savings time hits us, twice a year, my internal clock doesn't skip a beat and I wake at 3 by the clock, irrespective of the adjustment. Fortunately I absolutely love those early morning hours when my world is quite.

Most Westerners tease me about this peculiar behavior and accuse me of keeping 'Irish time' no matter where in the world I happen to be located - and it is true that when I am in Ireland, I tend to wake at about 3 a.m. CST, rather than GMT and I have very little difficulty adjusting to time differences when I travel.

My Eastern friend declared with delight that I must be a sage or a pundit. Now, I thought I knew the meaning of the term 'sage' but the term pundit in Western circles appears to have lost it more mystical and acceptable meaning. To me a pundit was someone who was somewhat sleazy - being more a political or even bookies tipster, so I looked up the true meaning of both words and felt somewhat complimented- I will interpret 2. below 'a learned man' - to be referencing 'mankind' as a whole rather than specifying gender in this instance. Particularly as one of my most revered people, Gandhi is quoted as saying:

Having searched for a more Eastern definition of sage or pundit, I came across this site which has a wealth of information on Hinduism: "... sages had understanding of things and places which normal people like you and I could never even imagine..." and "... had complete understanding of everything in this world and the heaven..."


I started my quest feeling somewhat complimented, and while my quest to find more information on Hinduism will continue, I find myself feeling very highly complimented. That is praise indeed even if that praise is not entirely deserved. 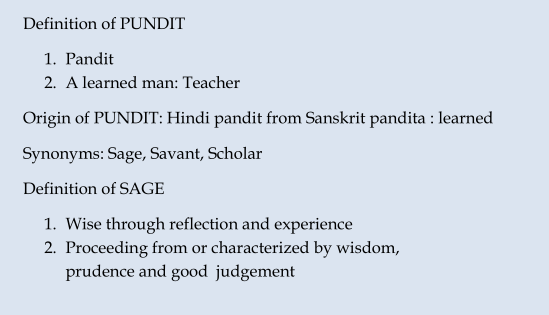 Posted by Aideen at 4:32 PM No comments:

I have worked in a number of different companies, in London (England), Dublin (Ireland), Ontario (Canada) the Bay Area in California and in Austin Texas. In each, the company culture was completely different. Naturally, between countries there are differences, and needless to say, my working life has spanned quite a number of years and during that time so much has changed.

When I started working, no executive would dream of typing up his own documentation, memos, letters - and there was no such thing as email. I started my working life as an invoice clerk, and, as dusk settles on my career I am a Quality Assurance Engineer, testing software - well, I am hopeful dusk will settle as retirement begins to look very enticing - right now my working life has the appearance of a mid summer evening in Ireland when the sun refuses to set. In between I had a myriad of different jobs and a number of years hiatus as a stay at home mom. Some of the companies I worked for were in the following areas: Pharmaceutical, Retail, Travel, Finance, Industrial Development, Banking, Mechanical Engineering, Petrochemical, Recruiting, Education, Electrical Manufacturing, Food Manufacturing, Logistics, Software and Horse Livery - not necessarily in that order. 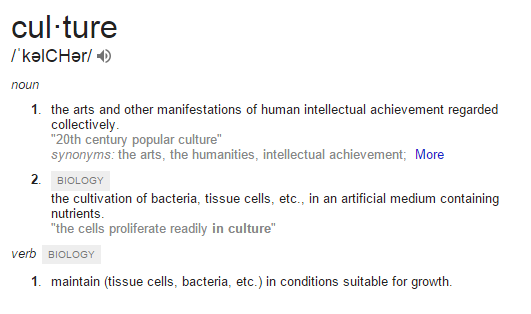 A very fitting definition, considering how different companies are, when it comes to their culture and the importance, or lack thereof, that the company executives place on the nurturing of this. Almost exclusively, I have left jobs because of a negative or repressive culture, and stayed in positions because of a supportive and positive culture despite other aspects of the job being less than ideal. Where some cultures have been manifestations of human intellectual achievement, others have been a cultivation of bacterial growth and not the good kind.

Experts estimate it costs more than twice an employee’s salary to find and train a replacement. And churn can damage morale among remaining employees, plus those who leave frequently take the best with them. I have started job searches whenever there has been churning of staff and once they have departed and settled comfortably in their new digs, then the poaching starts.

According to Frances Frei and Anne Morriss at Harvard Business Review:


“Culture guides discretionary behavior and it picks up where the employee handbook leaves off. Culture tells us how to respond to an unprecedented service request. It tells us whether to risk telling our bosses about our new ideas, and whether to surface or hide problems. Employees make hundreds of decisions on their own every day, and culture is our guide. Culture tells us what to do when the CEO isn’t in the room, which is of course most of the time.”

I left one job, after many years, because what had once been a fun, supportive and enjoyable place to work, with reasonable remuneration and good benefits deteriorated over a fairly short period of time, into a very unpleasant, unsupportive workplace. The benefits were slashed to save cost to the company while at the same time money was spent on things that in no way improved the working environment for the majority. The laughter and lightheartedness in the corridors and kitchen was replaced by whispered, disgruntled conversations in the restrooms and cubicle areas. And worst of all, staff who made the effort and misplaced their trust by speaking to executives about the unwelcome changes, deeply regretted their naiveté. What was significant about the culture at this company is that it changed from being a boring lack lustre environment, into an exciting, challenging and very enjoyable one, and then quickly fell into the disgruntled unhappy place I finally left. Each change in the culture, coincided closely to a change in the CEO. Coincidence? I don't think so.

It is no surprise that many of the reviews of the GlassDoor.com Top 50 Best Places to Work are centered around the culture. As an aside, I am proud to note that a Texas company, HEB are placed 7th in the list.

All of this is very obvious so is it greed or stupidity that results in a less than acceptable culture? Or perhaps a bit of both. Definitely it indicates someone at the top who is in it for the short term.