Do you store memories in your olfactory tube?

Recently, I was making béchamel sauce a.k.a. white sauce, without fail as with every time I make it, along came that memory, playing like a video in my head. I was about 12 years old, it was Easter Sunday and my mother was ill in bed. When I was growing up Easter was a big event. We all got new clothes and Easter Eggs, Lent was over and all that deprivation and penance was done. Families gathered over a huge feast, almost as big as Christmas dinner.

We usually had a large leg of lamb, roasted with potatoes and served with cauliflower covered in previously mentioned béchamel sauce. But as my mother was ill and my older sister was not home, I took it upon myself to cook dinner. The most I had ever done in the way of cooking up to then was help prepare vegetables. With some instructions from the sick bed, I had everything prepared in good time, the very last task was the béchamel sauce. I knew how to make it, but I had never done it before.

There was no such thing as instant packaged sauces, my mother made this sauce from scratch. I melted the butter, mixed in the flour and started adding the milk. within seconds I had a gross lumpy mess. I was horrified! I trudged up the three flights of stairs from the basement kitchen to my mother's bedroom with the saucepan. She took one look at what I offered her and said I would have to start again. She explained in detail how to take the pan off the heat and slowly add the milk a little at a time, stirring constantly. I started again, carefully following her directions.

The second attempt worked - it was perfect, just like mother made! That memory is as vivid now as the event was then. I remember ever step of those stairs, I remember the panic I felt, and my mother's poor feverish face as she patiently explained how to do it right. The memory carries the scent of boiled cauliflower and roasting meat and potatoes. I remember serving my mother a tray in her room, and I know everyone gathered and ate the first dinner I had ever cooked and served, but the memory was the white sauce. 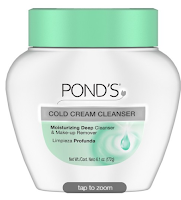 Some time ago I asked my mother in law about her childhood. I was fascinated by the fact that her father was a sharecropper in Kentucky. I asked her to describe her life and the house they lived in when she was growing up. She said it was just a house. I thought I could pull the vision of it out of her memory by asking questions. I asked her if she remembered when they first moved into the house, and she did, she told me about the room in a separate wing that was her bedroom and that she was always frightened there because it was separated from the rest of the family. I asked her what did the house smell like the first time she went into it. She didn't remember any smell. I imagined dusty, old wood smell, perhaps some wood rot, and tobacco maybe (it was on a tobacco farm) but no, she had nothing. 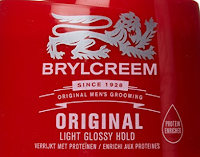 That lack of recall started me thinking about memory and what different people remember, and what triggers the recall. And does everyone remember in pictures and scents, or I am just weird? or is my mother in law unusual because she doesn't? 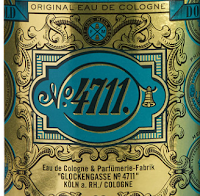 I know that certain smells trigger memories, but often I find it is the opposite, When I think of my father, I get the smell of stale Brylcreem, whiskey, and snuff. For my grandmother, it is Pond's Cold Cream and Coty's face power, memories of my mother bring back the scent of 4711 Eau de Cologne.

Then there are sounds that bring back memories, or maybe not so much the memory as the emotions surrounding that memory. For instance, whistling. When I hear someone whistling I get a powerful feeling of suppressed anger. I am usually a very even tempered person, but at the sound of whistling I want to punch the whistler in the face, or anywhere that will result in them ceasing to whistle.

I hate whistling so much I have blogged about it before, it is as though I was hypnotized to react with violence at the sound. And I guess in a way I was, probably more correct to say I was conditioned. My father used to whistle all the time, and he also used to regularly lay into us for no other reason than he was angry about something, or drunk. I don't mean that he gave us a sharp tap across the legs. No, he lifted us off our feet and punched, or backhanded us to the floor and kicked. Hence, when I hear whistling, I feel the need to protect myself, or maybe take revenge.

Posted by Aideen at 4:30 PM No comments:

Yep, it got up and went. So would I, if I didn't have some good reasons to stay.

My plan was to come to the land of the free, where all men (and women) are (were) equal, where religion played no part in politics and immigrants were welcomed with open arms, especially those escaping wars and famine, which to be fair, I was not.

And I did, when I truly believed my life was over, I made a new life for myself. For 22 years I never once regretted my decision. If you read my book, you will know that it was not all a bed of roses, but on balance, it has been an amazing and rewarding experience. Even the bad experiences were good lessons learned.

Last November that changed. That was when my get up got up and took off. I stayed only because my husband is here and he would not consider leaving; plus we had made a commitment to take care of his aging mother, I was not about to go back on my word. 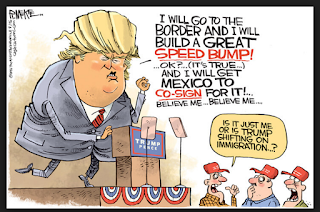 But the bottom fell out of my world. Work became a chore; even my hobbies were not a distraction; I stopped writing; I stopped working on designing new embroidery patterns, my embroidery machine sat untouched for six months. In fact, when I finally checked on it, it too had lost it's get up and go, it sat abandoned for another month waiting for me to drum up enough interest to take it to be serviced. Finally, I asked my husband to see what could be done to fix it. Apparently, the answer is nothing - at least nothing worth doing. It would cost as much as the machine was worth to fix it.

Apparently, this rot is spreading. Can nothing be fixed anymore? If only everything that is broken could be as easily replaced as an embroidery machine.

I continue working because we have to live, and now my hope of ever retiring is fading as I see this country being slowly destroyed. The rich will get richer, the poor and elderly will not be able to survive. Women are going to lose control of their own health decisions, unwanted children will be born, but the social welfare, health and educational support for them will have been removed. Bullying appears to no longer be a bad thing and instances of racism, sexism, and anti-gay abuse is being reported more and more frequently. Apparently, if our president displays these traits, it must be OK?

Everything I read online and hear on the news fills me with pessimism, and I am an optimistic person by nature. The treatment of immigrants, non-Christians, LBGT, the poor, women, children - in fact, anyone who is not a rich, male, white, so-called Christian, is getting more and more abusive and exclusionary treatment. And now America, the champion of the Paris Agreement, is once again just a greedy self serving force determined to destroy the world, as long as those rich white men become richer, to hell with everyone else. If hell really existed, it would be populated by rich, white, male Christians. 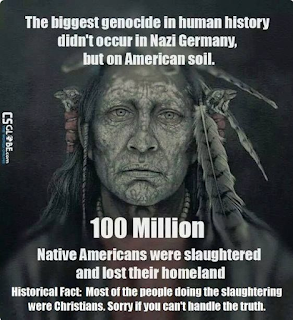 Listen up America - The only true Americans are the Native American tribes. If you are a white, Christian male, you are an immigrant, or you are here because immigration is part and parcel of the foundation of America and your ancestors were welcomed here - sadly much of that foundation was built on the mass slaughtering of the real Americans.

And the appalling treatment of African Americans started with slavery, dragging them to America against their will, and despite the Civil Rights Movement, and so-called equality, they are still being discriminated against, and that discrimination and associated abuse are being fostered by the current administration. 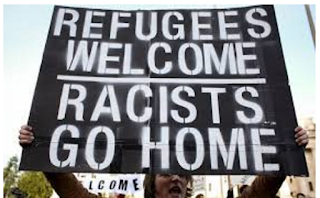 To a certain extent, I believe that we create our own reality however, I am not stupid enough to believe that we can control everything; so, after six months of mourning. I have decided to get up and get past this. I know that it is possible I may never again see the United States of America in the same light. I may never live to see this awful, cruel sea of hatred subside. But it is the reality that surrounds me. My responsibility is to carry on. To try, in whatever way possible I can, to be an opposing influence. Sitting around feeling sorry for myself and the entire country - in fact, most of this world, is not the answer.

My answer is to replace my embroidery machine with an even better one; get an even more powerful software package to create even better patterns, embrace the fact that I have a job and that I work with some truly amazing people; start writing again and be a positive force against the hatred I see all around me. I may never be able to have an influence on the overpowering bigotry and hatred, but I do have power over my own reaction to it.

We are doing our part, we will support the Paris Agreement- we are having solar panels installed to reduce our small carbon footprint. It is a small start, I can't leave and I can't sit around feeling sorry for myself and everyone needs to stand up and push back if we are going to fix this awful mess.