Piggy in the middle 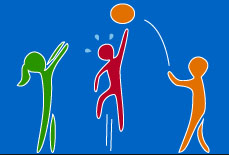 Anyone remember that game?

It summarizes what it is like to be a middle child. You are stuck between two others passing the ball over your head as you desperately try to catch it. It is pretty much the opposite of dodge ball, instead of trying to hit someone with the ball, you are trying to avoid them touching the ball.

According to the Cambridge Dictionary, the definition of Piggy in the middle is:

Once the 'piggy' has caught the ball, they get the opportunity to not be in the middle, and whoever threw the ball has to be the piggy. A loose ball is free for all. So, not exactly like being a middle child.

I was very surprised to discover how much has been written about the effects, both good and bad, of being a middle child. It was slightly amusing to notice that most of what has been written - by people qualified in medicine and / or psychology - was written by middle 'children'. Also, the definition of a middle child appears to apply to any child who is neither first of last in a group of siblings. Therefore, all children who are not the oldest and not the youngest, are middle children. The true middle child, in my opinion is the 2nd of only three children.

The term is then extended to make exceptions for gender - for example if the oldest and the youngest of three are boys, and the middle child is the only girl in the family, then she, apparently, doesn't experience the same 'middle child' syndrome as say, the middle of three boys, or three girls.

Am I a middle child? Depends on how you look at it. I always felt like I was, and I was the middle of three girls, but the third of six siblings. According to all I have read, given the order in which we were born, I am a middle child. We were, boy, three girls (me in the middle) then two boys.

Here is a very good definition of middle child syndrome - and it also explains why such a syndrome exists. I must admit I can relate to a lesser degree - being the middle of three girls, my older sister naturally got new clothes, I got to wear her old clothes when she had outgrown them but by the time I was finished with them they were not worth passing down so my younger sister got new clothes. It is very strange the apparently small injustices we hold on to - forever it would seem - because I still feel a mixture of sad and angry when I think of my confirmation outfit - my older sister's cast off confirmation outfit. Yes, my younger sister got a new outfit for her confirmation.

However, on the positive side, many of the traits that helped me to reach for, and grasp so many opportunities in my life are as a result of that very syndrome, assuming it truly does exist. I figured out early on that nothing is handed to you, you have to go out and get it.

I gathered a list of middle child traits from a number of websites, many of which were identical and so I guess all copied from the same source. Here are the main ones:
I have to admit I think that kind of describes me. I do like this from Psychology Today - advice for middle children:
I felt neglected and left out as a child, but I suspect any child in a large family feels like that, as a teenager I started to appreciate the fact that I truly appeared to be invisible a lot of the time and as an adult I really appreciate the fact that I am independent and not afraid to take risks.

I don't think I suffered any more than my siblings, nor do I think I had any greater advantages, just different. And the bottom line is not what cards you are dealt, but how you play your hand that is important. Ultimately, as I mentioned in a previous blog entry - we are responsible for our own lives, happiness and outcome.

I repeat what has become my mantra:  If you don't like it, change it! 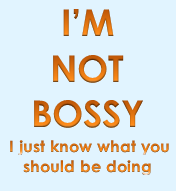 A long time ago, I discovered quite by accident, that I was very bossy, at least that is how it was defined back then. This trait was not very apparent when I was growing up because I was so painfully shy that speaking to anyone other than immediate family was extremely difficult. It is not easy to be bossy if you can't speak.

Looking back, I am amazed that I actually attempted to correct this quality - for yes, had I been male it would have been admirable, but that was then.

We are moving into an era where it is fast becoming a quality in women also, thanks to people like Sheryl Sandberg, COO of Facebook and founder of LeanIn.org and #BanBossy and I find myself having to work to reverse the damage done by a relatively expensive 3 day training course for Executive Secretaries.

I think the exercise that exposed my behavioral quirk was designed to foster team cooperation - at least that is the only plausible answer I can find for it. Back the, I was what was called an Executive Secretary - now referred to as an Administrative Assistant. There were about 20 of us on the course being held at the Irish Management Institute. For this particular exercise, we were divided into teams of 5. Each team was given a task to complete within 15 minutes and our efforts to accomplish this was captured on video. We were sent to a recording booth and the timer started.

I had come down with a very bad head cold just before the course started and that probably helped to reduce my patience and counterbalance my natural shyness. The task we had been set was "we were a group of staff members in large factory and we were responsible for arranging social activities. We had to plan an outing and get the word out to the entire staff immediately", we had to document the outing and how we planned to get the word out.

The minutes ticked away and we were sitting there self consciously doing pretty much nothing. I couldn't stand it any longer and the bossy came out. In other words, I took charge. We got down to planning and every time someone got side tracked I pulled them back to the task at hand - I forgot to mention I am also very competitive and I didn't want our team to fail.

We succeeded in our task within the allotted time. Then, when all the teams had finished our videos were played along with critiques invited from all the attendees and supplemented by the instructor. We were the only team who actually completed the exercise, but I was heavily criticized for being too bossy. Needless to say I was mortified, I had stepped outside my comfort zone and as a result all attention was on me - the bossiest trainee in the room.

Looking back on it, I am not very surprised that I didn't at least get some recognition for being successful, that was the early 1980's and it was still not very acceptable for women to 'take charge'. But to this day I fight to overcome that horror of being bossy but if you take a look at the definition of bossy - I was NOT bossy I was taking charge.. As Shery Sandberg says:  When a little boy asserts himself, he's called a “leader.” Yet when a little girl does the same, she risks being branded “bossy.”

Posted by Aideen at 4:01 PM No comments: