On my last day of work I still had not received the promised email with a link to my Exit Interview, which like everything else in Amazon is self service - that is an online questionnaire. I checked my email and the web page where the link is expected to materialize for the exiting employee. Nothing.

Actually, my official retirement day was not for another two days. 31st May. However, as that was Memorial Day and a holiday, my last day would be Friday 28th. I started the day at my normal time, 4.30 a.m. Central Time and chatted with a few of my colleagues in Bangalore - they are the reason I start so early; I like being able to interact with them in real time rather than by email. Next I cleaned up my work email and laptop hard drive. I know that when I return the laptop it will be reimaged immediately, but I still feel obliged to clean up after myself.

I again checked email for the Exit Interview; nothing.

For some weeks I had been avoiding attending meetings involving the wider team - that is development and product; I restricted my interactions to just the QA team and only some of these meetings as I sought to reduce any dependency on me and avoid unintentionally tripping up my senior engineer who was taking over the management of the QA team. On this final day I joined the Austin development team's standup in order to say a thank you and farewell, unfortunately there were only two of the 5 member team present but they bid me a fond farewell and wished me luck.

Checked email for the Exit Interview; nothing.

Next I sent my farewell email to the wider audience, the Product team in Seattle, the Development Team in Seattle - most of whom I had never met as they had been hired on during the lockdown and to all of the people I had worked with in the almost 7 years at Amazon; the friends I had made along the way and of course the Development Team in Austin who I had worked closely with, and my own QA Team.

I checked my email for the Exit Interview; still nothing - the original email suggested that Amazon would really appreciate me filling in this questionnaire as it would assist them in constantly improving their employee relations. As they already knew that mine was not a happy story, apparently they didn't want to hear it, or perhaps didn't want it on record.

At midday I dialed into my final meeting of my working life. No, not a wider team retirement meeting, not a final meeting with the group leadership to wish me well - that didn't happen; it was better than that. The QA Team I had been part of for almost 7 years, and had managed for 4 of those years had scheduled a farewell meeting. In attendance was all three from Bangalore - bear in mind this was the end of a very busy week for all of the team, and in India, very late on a Friday night; two from Seattle and two from Austin, plus the Technical Program Manager with whom I was friendly and the entire team worked closely with.

Everyone in the group turned on their video - a huge compliment as it is extremely rare for some people to ever do that. For the next 90 minutes my team took turns to give examples of how I had positively impacted their lives. One of the team had worked into the early hours of the morning to prepare a collage for me - we are friends on Facebook and she was able to gather photos of the many group lunches I had arranged over the years - both with the teams in Austin and on my many visits to Seattle. These were not just the QA team, but development and product teams also. I plan to have it printed and framed - that was my retirement gift from my wonderful team. My retirement gift from Amazon, and the leadership of the group with whom I had worked for 7 years was total silence.

Finally I called an end to the meeting as my colleagues from India were approaching their midnight and I was feeling somewhat overwhelmed by the gratitude and kindness shown by my team.

I checked my email again to see if I had received the Exit Interview .. nothing. So I emailed HR to make it clear that I had not refused to complete the form, I had never received it. Then I unplugged my laptop to allow the battery to drain in advance of returning it to Amazon.

Next morning, Saturday, I logged into my laptop again to check on the battery - still at 64% - so I decided to check my email one last time in case the Exit Interview had arrived the previous evening. I could not connect to VPN - my credentials no longer worked. Despite Monday being my official last day - as it is a holiday I guess they decided to shut me down on Friday. Luckily I had returned everything else to the office earlier in the month because no doubt my access there was also shut down.

Here is the collage my team gave me - in the top right hand corner is a screenshot of our final farewell meeting. My heartfelt thanks to that team of amazing engineers who went a very long way to making my retirement feel special. 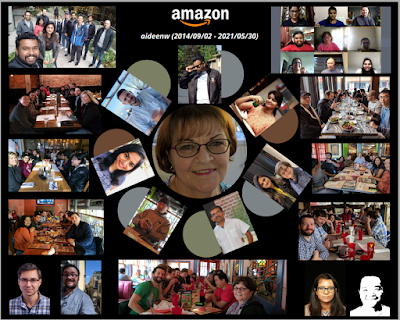 Now I just have to work at trying to relax and deal with the feeling of  being set adrift. I realized that I had become addicted to constantly checking my work email and chat client no matter the time or day. I find myself picking up my phone and realizing, that life is over and is going on fine without me.