I have never been afraid of change. I have learned over the years that change is inevitable, and is good, well mostly good but definitely inevitable. What I was reminded of two weeks ago, is that change is happening all the time. Not just around us, but inside us, even if we are not aware.

When I first arrived in the US, I had absolutely no spare cash, so a gym membership was out of the question. There was a park next to my apartment. That park had a running track which I used regularly. Later I did join a gym and, because it was expensive, I went every morning before work for over a year. After that I purchased a treadmill and some weights and worked out at home. Sometimes I kept up a workout routine for months. Sadly there were also months of not working out. The one thing that has been consistent is that I do not enjoy working out; I do it for my health, in particular it helps to strengthen old bones and we all know, a body in motion stays in motion.

I used to run because it was the exercise I disliked least. I can't do that anymore due to a knee injury resulting in arthritis. My knee refuses to hold me up if I attempt to run, so I don't. In the last two years I have been working out diligently, one hour per day, five days a week, walking on the treadmill. A few months ago I added 30 minutes of yoga to that. I don't even think about it anymore. As soon as I wake up I am already heading for the treadmill, in both body and mind. I waited to develop a love for it but only found a tolerance and blind acceptance that it was worth it.

Two weeks ago I stubbed my toe. The toe in question, the second toe on my right foot, is slightly deformed as a result of surgery to correct a hammer toe, three actually plus a bunion. The surgery removed the hammered joints and fused the toes. However, during the healing process the toe turned slightly.

Demonstrated in these before and after photos: 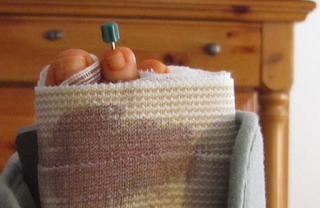 When fully healed and the pin was removed, it was apparent that the toe was slightly longer than it had been. Well, obviously it was longer because it was no longer curled up with the hammered joint, but it was also longer than it was before the hammering issue, longer than the equivalent toe on the other foot. The change was fractional and not enough to require going up a shoe size. The biggest impact this had—apart from no longer being able to curl my toes—where the top of my toe would have been protected by the nail, because of the very slight twist in the toe, the nail only partially did it's job. Also, stubbing the toes on that foot meant stubbing that longer toe first and hardest.

The stubbing of the toe, that same deformed one, caused a slight inflammation, which in turn caused a small amount of swelling. Just enough for said toe to rub against my sneakers as I walked. So, an hour of walking every morning was a lot of rubbing on the already injured toe. Not only did a blister form on the soft skin that was now where the nail should have been, but the side of the nail was also taking some of the pressure. The nail quickly turned purple, well to be exact, the skin under the nail turned purple. I knew the nail was going to grow off at that point. The biggest problem was that the toe was very painful and continued to rub against the top of my sneakers. It looked absolutely gross also, and even worse in this photo where it is finally healing but the nail is beginning to lift.

I tried a few things in an effort to work around this. I tried wearing hiking sandals. They were uncomfortable and the straps rubbed my foot. I still had an old pair of sneakers—I never throw anything away if I can avoid it. I cut a hole in the top of the sneaker, where the toe was rubbing. That helped but the toe was not healing. Finally I decided I would have to rest it completely.

That was Tuesday, after my workout. I figured if I didn't workout at all for the rest of the week, perhaps it would heal by Monday. That is what I did. And it did heal.

All that to explain what change I had discovered happening within. That week of not working out, resting my foot was an eye opener. My joints were stiff and I felt sluggish. I also felt guilty because I was being lazy. I realized that not only did that regular workout drastically improve my mobility and my emotional well being, I was actually missing it.

I might like working out! Who would have thought? I wonder how long that has been going on!? Or, if I don't enjoy the act of working out, I do love the benefits, now that I am aware of them. The end definitely justifies the means.