It is the little things that matter

Some time ago I blogged about the impact of lack of appreciation. I was at a point in my life where I had been putting myself out for someone who took everything I did for granted. As is my usual method of dealing with life and it's problems, I wrote about it, naturally writing leads to researching and that in turn leads to a better understanding and so the therapeutic effect takes place.

"Silent gratitude isn't very much to anyone." - Gertrude Stein

In the last week I had two instances of the complete opposite and experienced the huge positive impact that being appreciated has. The first was on Thursday. 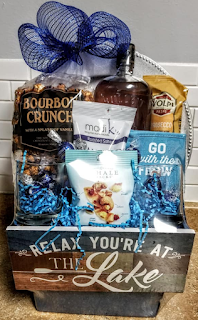 On the first Thursday of every month our cleaning service take over our home. We make a point of getting out of the house and giving them free rein. (Yes that is the correct spelling see here if you don't believe me). Up to this year I was at work and my husband would take his mother out to do whatever shopping she needed. Just before the Covid-19 pandemic took over his mother moved out of our home into assisted living and I was working from home full time; at that point I took a couple of hours off in the morning and we did our grocery shopping. This Thursday was no different. When we returned the cleaners had finished and were gone. On the counter in the kitchen there was a beautiful gift basket. I was dumbfounded and immediately took it apart to find who it was from. The only card in the basket was from the company who supplied it, Basket Case Austin, so I emailed them and asked them to tell me who I should thank. I got a response almost immediately saying they had emailed the sender. At the same time my husband received a text from our cleaning service, a family run business local to us in Lago Visa, Flores Cleaning Company, telling us that they had left the gift basket to thank us for being such good customers! All we did was pay them the very reasonable charge for a truly terrific job, and we never complained because there was never a reason to complain. I was so very touched by this expression of appreciation.

"Feeling gratitude and not expressing it is like wrapping a present and not giving it." - William Arthur Ward

The following day I had taken the day off work and we were out on the lake fishing when I received a text message from a guy who had worked for me for a number of years and had left my team just a few months previously. He wanted to know when he could call me as he had some news he wanted to share. I said "now is good" and he called. He told me that he had been offered a job with one of the top Tech companies in the world and he followed up by saying he would not have been able to get through the interview if it were not for the coaching and mentoring he had received from me while I was his manager. I was thrilled for him of course, and quite overcome that he credited me with so much, but most of all, that he took the time to call me and thank me.

How often do we think, "thank goodness for so-and-so" and never think to say it to them? This man credited me with his great achievement and took the time to tell me so. Not only did I get a surge of Dopamine, but I felt vindicated. I was going through a difficult time at work, as a result of which I was getting ready to retire, and this one phone call went a very long way towards making me feel a whole lot more valued.

“The deepest principle of human nature is a craving to be appreciated." - William James (Psychologist)