Respect for your elders

How many times I heard that when I was growing up. I was never quite sure why we were expected to respect our elders. I knew it was probably something to do with wisdom of age, and possibly because they had done stuff from which we benefited in some way and for which we should be grateful. 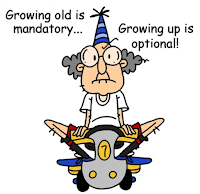 On the wisdom point, I didn't buy it. I knew a fair few elderly people and some definitely didn't display much wisdom, assuming wisdom equated with intelligence or common sense, or both. However, it is slightly more than that. It is described as  the combination of experience and knowledge, with the power of applying them or soundness of judgement in a person. Despite silently questioning the logic, I dutifully respected my elders, keeping my opinions to myself. I was brought up to value manners above all else. My grandmother was French and I have to tell you, the French have a lot of rules when it comes to manners.
Now that I am elderly I can see some arguments for demanding respect, at least for some of us. 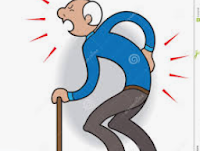 When you are young, and even into early middle age, minor injuries are an annoyance, and sometimes painful and temporarily debilitating. Aches and pains can usually be attributed to such minor injuries, and are almost always also temporary. Young people expect their pains to heal and disappear.
You know you are old when you become aware that the pains are not only there to stay, they will continue to increase in intensity and location. You learn to live with them because there is only one alternative and you are working hard to delay that one. If you are not, you should be.

I know there are elderly people out there who whine and complain all the time. But for every one of them, there are myriad others who silently go about the remainder of their lives, silent with regard to the pain that is. Sometimes of course, there will be a uncontrolled grunt or groan. These are uncontrolled in the same way a sneeze is. If you are forewarned, you can stifle it, otherwise it will come out.
Contrary to what some people seem to believe, complaining about things does not make them easier to bear, and it certainly does not make the complainer easy to bear. While you might feel sympathetic at first, this particular emotion can quickly be worn thin. Just as the joints and cartilage between them wears thin and causes the pain.
I have mentioned my mother in law a few times in blogs; one of the things I did admire about her was how little she complained about the pain she must surely have been experiencing. She had both knees replaced. We know that, while artificial joints help considerably, this is more to do with the ability to move rather than the removal of the pain. I am sure Mildred was in almost continuous pain but she almost never complained about it. Strangely, she found a lot of other less serious things to complain about; perhaps that was her secret, distraction.
So, respect your elders, at least those who don't complain about their aches and pains, because I guarantee you, they are in some degree of pain - continuously. Respect them for not whining about it.
Posted by Aideen at 10:39 AM