I am no stranger to grief. You don't get to your seventies without having suffered loss more than once. I am well aware that after the initial grieving, there will be waves sometimes for years, with time these waves are easier to ride, but nonetheless they don't ever go away; nor would I want them to. Those I have lost are too important to ever want to stop missing them. However, grief is very much self centered - we are sorry for our loss. 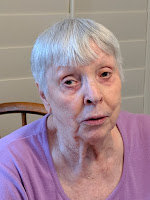 What surprises me is the occasional reminder of my mother in law that causes me to feel a wave of sadness. This is more compassion than grief. I feel sorry, not for myself, but for her. Not now, now she feels nothing; during her life, which I think was so much less than it could have been, at least towards the end. After her funeral I wrote this blog entry, which gives some background. One of the things that saddens me is that she was not aware how much we cared about her, and her well being. The reason I don't feel grief is because she never really allowed us to get close to her and finally, she rejected us completely. In fact, I feel more grief at the rejection that I do the loss - you can't lose something you never really had.

Perhaps our emphasis on her wellbeing was what pissed her off.

Naturally, she was not aware that she was losing her edge. Neither was the rest of her family. Those who lived close by spent so little time with her they wouldn't notice the little signs. The extended family were many states away. I once suggested to her that we take a trip to Kentucky to visit relatives and where she grew up. She said she had no interest in going back.

We probably came across as being overly interfering, fussing over her, going behind her and turning off the stove, or closing the refrigerator door which she frequently left open. Not to mention suggesting (probably way too often) that it would be good for her to get more exercise.

When she suddenly took a dislike to vegetables and refused to eat any, other than raw in a salad, we started eating a lot of salads. I also started adding pureed vegetables to my bolognese sauce and chili. I used to do that when my younger son wouldn't eat any veggies. I got away with it for a while, but then she started to taste the vegetables, or perhaps she discovered what I was doing, either way, she refused to eat it.

Little, unexpected, things bring her to mind; when I make a meal that she used to particularly enjoy, like baked fish or panko chicken, I think of  her.

What makes me most sad is thinking of her in isolation in the retirement home for the little over a year before she died. She used to love to sit and listen to audio books on her kindle. In the retirement home she had no internet connectivity, so no kindle. Her eyesight was way too bad to read. She could no longer go out to eat, she so enjoyed our Friday, and sometimes also Saturday, night dinners at Logan's; though she always got annoyed when I took a photograph of her to post for her family in Kentucky and Florida, so they could see how well she was doing. My own family in Europe were also happy to see her doing well.

Logan's didn't survive the pandemic either.

It was her choice to leave, not only did she not talk to us about it, she gave us almost no warning. I guess she just didn't realize what she would have to give up. 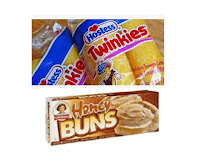 When she was living with us I used to take her to Kohl's every couple of months and help her find and buy the underwear she liked. My husband took her out to the huge HEB store every week, while she thought she was shopping, the main objective was to ensure she got some exercise as she walked up and down the aisles. She did buy a few things, personal care products and those awful prepackaged cakes that have an indefinite shelf life. Sometimes she bought weird grocery items, I say weird because they were random things we either already had or would never use. She put them in the pantry and when the 'use by' date was past I threw them away.
Due to the pandemic she could not leave the retirement home to go out shopping or anywhere else. 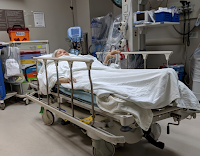 Recently I was thinking about when her lung collapsed; we thought she would not survive that. Early one Saturday morning, September 7th 2019, she called up the stairs to us that she needed to go to the hospital. We came rushing down - rushing is probably not exactly the right word to describe how two elderly people with bad knees attempted to hurry down the stairs, we did hurry. She had chest pains and she had been suffering all night. We drove her to the emergency room and sat with her for about 6 hours while they took X-Rays and blood tests; finally inflating her lung. Then she was admitted to hospital 'overnight', this became two nights.

As soon as she was settled we headed back to the house to put together a bag of all the things she would need. When we returned her younger son and his wife were there (my husband had called his brother to let him know, naturally). They were seated in the only two visitors seats. I gave her the bag of necessities she had requested and retreated to the back of the room to prop myself up against the wall beside my husband - we were exhausted and hungry at this stage. As my younger brother in law was not about to give up his chair for me, we finally left and got something to eat. 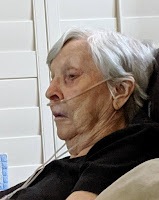 The following day we returned and the chairs were vacant so I was able to sit down. We took her home on Monday. She never recovered fully, requiring oxygen from then on. Apart from the large oxygen tanks for use at home, my husband bought her a small, over the shoulder oxygen tank that would do her for going to Logan's or to the store.
Life continued as usual for just a few months before she suddenly moved out without warning that December, just before Christmas (see blog). 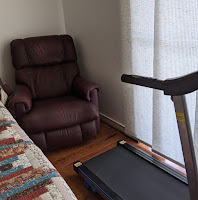 We had set up a bedroom for her at our lake house. My treadmill is in that bedroom now; every morning when I workout I see her recliner in the corner by the window, where she could have spent her last days listening to her books and looking out at the lake. It is hard not to be reminded, not to feel sad. 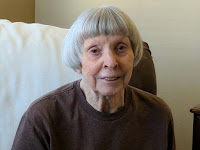 Possibly the saddest thing of all, is that the photo of her in her obituary is one I took, it was a photo I took of her after she got a new hair style that she was very pleased with. Apparently her younger son who took care of the obituary, and everything else after she moved out of our home, didn't have any photos of her and took one of mine from Facebook.
There is something quite heart wrenching about that.

Considering that she lived with us for eight years, I am sure that these memories, and others will continue to surface and make me sad, sad for her, for what she had and failed to appreciate or enjoy, and what she gave up and eventually lost. And while I worry that her last year was lonely and boring, I do hope she found some joy in it.

Perhaps after all, she was just happy to be away from us.