Another walk back in time

A happy New Year to everyone. Typically we look back on the past year at this time. On this New Year's Day, I would rather forget the past two years. I prefer to think back to 1950s and early 1960s, in Ireland I should add. I have no idea what life was like in the US during that time, or anywhere else for that matter. My horizons didn't widen until the mid-60s when I moved to England.
I previously wrote about memories of my mother from the 1950s. I suppose that got me thinking and more snippets gurgled to the surface. It is said that as you get older while your short term memory becomes unreliable, your long term memory comes more into focus. Of course, the caveat is that for most of us, our memories are flawed. We all remember similar incidents completely differently, as I demonstrated here. Little things will spark a memory and like pulling a thread, a series of memories will unravel. I also wrote here, about how smells and sounds will trigger memories. 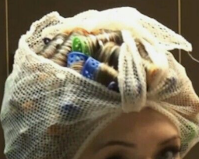 I remember my mother saying "Il faut souffrir pour être belle". As she pulled my hair tightly into the braids. You have to suffer to be beautiful. Why? I mean, either you are already beautiful or you are not. Braids are not going to make that much difference. Also, I am not quite sure what the payoff is either. We did suffer somewhat though. We wanted to be beautiful, and never believed that we were. 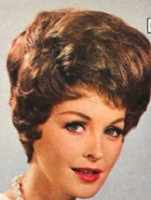 After the braids, then there were the rollers!
In order to achieve those crazy hairstyles. Because we, my sisters and I, didn't own a hair dryer, we washed our hair at night, wrapped it up tightly in rollers, held in place with long metal pins and yes, slept that way while it dried. Next morning, remove the rollers and backcomb and tease the hair into what we considered to be beautiful. If you think that sounds uncomfortable you are correct, it was.

Add to that the fact that we lived in a large old house. There was no central heating and no insulation. Ireland rarely suffers weather extremes, but winter is long, cold and damp. We used to go to bed with a hot water bottle at our feet. At first this was too hot to touch, but quickly it cooled sufficiently for us to put our feet on it; finally, in the morning it was stone cold. If we woke during the night, the cold bottle got kicked out of the bed.
We did have an open fireplace in each bedroom, however the work involved in lighting a fire and cleaning out the fireplace each day was something none of us had time for. 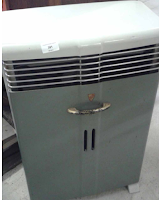 Eventually my mother bought paraffin heaters for each of our bedrooms. These contained a small tank to hold the fuel and a wick to burn it. They produced a good amount of heat and also strongly smelling fumes. We lit the heaters about an hour before bedtime and were supposed to put them out before getting into bed. I frequently left mine burning all night, waking with a headache. I was unaware that I was lucky to wake at all. I guess the open fireplace and draughty old house saved our lives. 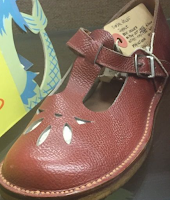 Recently my husband remarked on the tan lines on my feet, created by a long hot summer of fishing while wearing flip flops. As soon as he drew my attention to it I immediately saw my 1950s foot, with a flower pattern created by the sun through the pattern on my sandals. Exactly like the sandals in the photo. Every Easter we got a new pair of these sandals. They quickly became scuffed across the toes and eventually we outgrew them, usually before the summer was over. Naturally we were not going to get another pair of sandals at that point, and we didn't get our winter shoes until it was time to go back to school in September. A strip of leather across the toes of the sandals would be cut out to allow our feet to continue growing for what was left of the summer. As the summer ended, our feet were stamped with the pattern from our sandals. We frequently had scabbing across the tip of our toes, where our feet had grown so much our toes were grazed on the ground. Through the winter we watched the tanned pattern fade away as the toes healed. 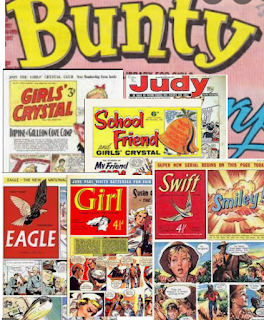 Another memory was triggered by my sister asking me if I remembered the name of the weekly comic she got as a child. Weekly comics are no longer sold in every newsagents, or on news stands. Those that survived are now part of a nerdy cult and sold only in comic shops. But when we were kids there were dozens of them, everyone had their favorite. We used to have one each, all six of us, and they were delivered to the house every week. New ones appeared regularly, old ones disappeared or were merged in with more popular versions. I guess they were the 'screen time' of the 50s and 60s. We didn't have a TV and smartphones and tablets were still way in the future. So we waited eagerly for our comic and later swapped with each other, and friends who got a different one.
Eagle, Girl, Swift, Robin, School Friend, Girls' Crystal, Bunty, Judy, Dandy, Beano, Topper, Beezer, the list is endless, and all were British comics. I doubt anyone in the US has heard of them. And then of course, there were the teen romance comics. After that I progressed to Wonder Woman, Superman and Batman. When I left home and moved to Canada I left behind a large box of my comics. I never saw them again. I often wonder what they would be worth now! If my mother had only known they might have been valuable some day, she might not have thrown them out. 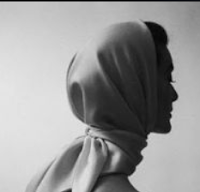 Another throwback to the early 1960s was the headscarf, not just the headscarf but the way we wore it. Every teenage girl owned more than one headscarf, I had at least 4, in different colors. They were not just tied under the chin, but then wrapped around and tied again at the back of the neck, this ensured that our hair was kept in place and the scarf didn't fly off in the constant damp wind we grew up with; it also kept the neck warm. 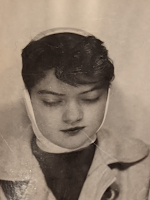 Here is a photo of me way back then, wearing one of my scarves. This photo was taken in a photo booth, you can probably tell. And of course, the scarf did flatten the hair style a night of attempting to sleep in rollers helped to create.
Posted by Aideen at 7:43 AM