I have been married twice, my first marriage lasted 21 years. My second marriage is in its 21st year as I write this. While it is easy to say I wish the first one had never happened, I won't say that. For one thing I would not have my three wonderful children, secondly, everything that happened to me up to now has led me to exactly where I am today. Changing anything would change everything. Besides, there are lessons to be learned from every experience in life. Plus, I just published a post about not looking back with regret.

I was twenty-two years, one month and one day old when I got married for the first time.  It was the day of the first Civil Rights March in Northern Ireland, heralding thirty years of bitter strife. It was also the start of the Mexico Olympics

My uncle, my mother's younger brother, was giving me away, my father was on sabbatical in Harvard University. Both my sisters were living in Canada. Of my three brothers, the older refused to attend the church on religious grounds—he was then agnostic, or atheist, or both. The two younger ones planned to attend, but the older of the two slept late and missed the ceremony. The groom's family lived in London and the only representative from there was the best man, a college friend of the groom. The entire wedding party was about forty people; we took up the first two rows of pews in a beautiful old granite church that could have seated close to a thousand.

There was one other ‘guest’ on the groom’s side. An amateur opera singer, a business acquaintance. We had not planned on inviting him to the wedding, but he decided that he would sing for us.  Nothing we could say would dissuade him. And so, in the almost empty church, with the small wedding party clustered around the alter, our uninvited guest sang from the choir gallery, at the opposite end of the church. I do not remember what he sang.

We were having the reception in a function room at the Airport restaurant,. We were booked on a flight to London, departing at 4 p.m. There we had planned a second, dinner reception, for my new husband’s family.

When we arrived at our hotel in London, my new in-laws were already gathered, thirty minutes early. We had hoped to be able to freshen up before dinner.  Instead we had to rush up to our room, drag our wedding outfits from our bags and jump into them. We had promised the family that much. The next morning we flew to Jersey in the British Channel Islands.

The rest of our two weeks went fairly well, apart from a bout of food poisoning that I suffered and many bouts of sickness my husband suffered, due to the fact that he sat up almost all night, every night, watching the Olympics live from Mexico, drinking the duty free alcohol in the tiny bar of our bed and breakfast hotel. That should have been a sign to me, as to how the rest of the marriage would pan out.

That marriage lasted almost twenty-one years, despite the fact that I was miserable for the last fifteen of those years I really did try to keep it together, until I didn't. I had promised myself that my children would not grow up in a broken home, as I had. I am still not sure if I did them any favors by sticking to that promise. I did learn a few lessons along the way. Do not tolerate control freaks was the main one. Mental abuse is still abuse was the second one. Watch out for gaslighting. Finally, love cannot exist without trust and respect. You can read here about my somewhat unusual divorce.

I had only known Larry for four months and eighteen days, but I had fallen in love with him the first time we spoke on the phone, before ever meeting. We first met on a dating website. Within a few weeks Larry had moved into my home. Then unexpectedly, he lost his job. He was not just without income, he was without health insurance. The company I was working for at that time did not offer cover from domestic partners, only for a spouse. We talked about it for a few weeks and as his job search was proving fruitless, we decided the answer was that we should get married.

One weekend in late October 2001, we agreed that Monday or Tuesday of that week would be good.  We settled for the Tuesday and that day I took an early lunch.  Larry picked me up from the office and we went to the Travis Country Court House and got married, well, it was officially an 'informal' marriage, that is, we legally signed the Common Law Marriage Certificate.
It was lovely in a crazy sort of way, it appealed to my sense of the ridiculous.
We arrived at the Court House, got through the security, tightened since 9/11, the previous month. We headed up the elevator to the second floor.  There we found the room for marriages.  It was similar to a post office, or driving test center.  We took a number and waited to be called by one of the clerks behind the counter.  We didn’t have to wait more than ten minutes.  There were no guests, no witnesses, just us.  We presented our picture id, completed and signed the forms we were given, paid our $30 and that was it. We even got a fancy certificate in a large brown envelope.  As we left the building the security guards congratulated us, and I realized the brown envelope was a dead give-away.

Larry drove me back to my office. I even managed to do some work that afternoon, but my head was filled with the events of the day, or at least the events of my lunch hour.  Shortly after 4 p.m. I emailed to my boss, saying something to the effect  “I got married at lunch time, so I think I will leave early and spend some time with my husband”.  And I left. The next morning the news was out, many of my colleagues came by my desk to congratulate me and question me.  Most of the men said “the next time I get married, that is the way I will do it”. 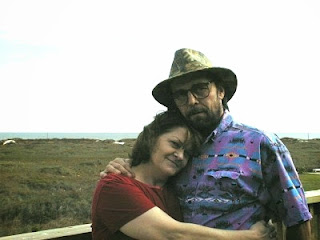 There were no photographs of the wedding, as I said there was no one there but us. Selfies were not yet a thing neither were smartphones. But here is one from our honeymoon 6 months after we got married we went to Port Aransas.
As I mentioned, my second marriage is heading into its 21st year, and I am happy to report that it is still as strong as ever. I got this one right. But the lesson is, for a marriage to last, both parties need to work at it. It takes two.