Birthdays and other days

I have often thought that birthdays should be something a mother celebrates, the day she welcomed a child into her life and ended the nine months of discomfort carrying that child. Not to mention the actual delivery. I know that is what I think of while still celebrating with my children on each of their birthdays.

For many years, I got more and more excited as my birthday approached. It took me a very long time to accept that it really was just another day—to everyone except me and perhaps my mother. Though after six children I am guessing my mother had quite enough of birthdays. But, every birthday I was bitterly disappointed because it was never the earth shattering day I expected.

My fourteenth birthday was the one I remember as being the very worst. I blamed that on the fact that it was a Sunday and everyone in our house had something else to do on Sunday, other than stick around and make me feel special. I spent the morning alone wondering if perhaps everyone would suddenly appear to surprise me. They didn't. I lay on my bed and cried for what felt like a very long time, of course I was fourteen years old and female, so hormones probably came into play as I wallowed in self pity. Then I decided if the day was going to be special I would have to make that happen on my own.

I took a bus into the city center and spent an hour in one of the amusement arcades on O'Connell Street. I don't know if it was legal even back then, 1960, but we kids often played the slot machines without any problems. And they were cash machines. I actually did win more than I lost. 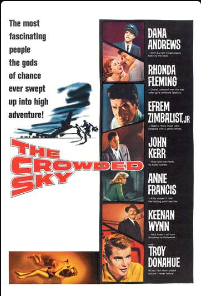 After that I went to a movie and lost myself in The Crowded Sky. I often went to the cinema on my own, and the year following my fourteenth birthday I saw seventy-five movies—I saved the ticket stubs for years, so I know the number. All of them when I should have been at school. I hated school and by the time I was fourteen I had figured out how to just not go and, more importantly, not get caught.

I think, that birthday was when I started to understand that I was in charge of my own life and my own happiness. It was many years later that I finally, fully comprehended that lesson. Seven years ago I published a post (here) listing some of the lessons I did learn and wished I could have told my younger self. But, I guess you have to learn the lesson for yourself.

That year, I decided my birthday was miserable and lonely because it was a Sunday. It was some time before I finally accepted that my birthday was really only of importance to me and I should not expect anyone else to care about it.

This year my birthday fell on a Sunday again. My husband bought me flowers earlier in the week, and it seemed there was a trail of flower deliveries to my door on the Friday. On Sunday, Social Media came alive with birthday messages and friends from all over the world send me messages, both publicly and privately. 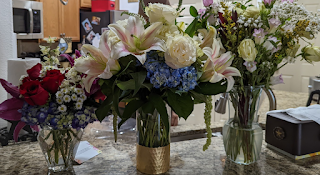 Perhaps if there had been an Internet and Social Media back in 1960, my fourteenth birthday would have been better—ah but then I would not have learned that very important lesson: Design your own dream.

Here is a collage I put together on this theme, while teaching Arts & Crafts in Summer Camp back in 1994, (See this post). 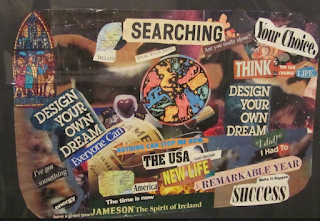 And, continuing the theme of celebrating motherhood with a birthday, I made my mother's sherry trifle instead of a birthday cake. I will get back on my diet tomorrow! 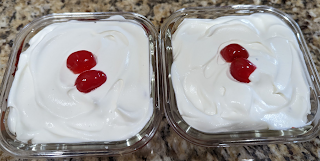