Last week we left my embroidery machine battle with the epiphany according to the Wiki: 'from the ancient Greek epiphaneia, ("manifestation, striking appearance") is an experience of sudden and striking realization' that I needed to change the presser foot to use the correct, embroidery foot. 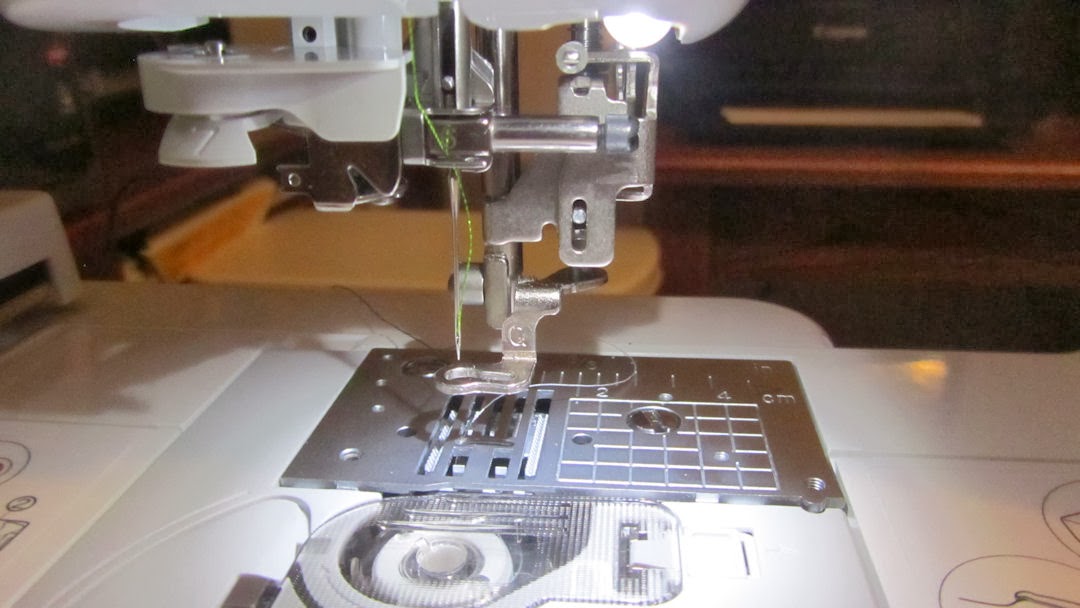 Today I changed the foot. That sounds so simple doesn't it? It must have taken me about 30 minutes and multiple attempts, carefully following the step by step instructions in the manual. Each time I thought I had it attached correctly, I pressed the 'needle down' button and nothing happened. A quick 'jiggle' of the foot revealed the fact that it was definitely not installed correctly. I did finally get it to connect and lock in place, unfortunately I have no idea how I did it. I just hope I never have to change it again.

Having finally fitted the correct presser foot, I got out my trusty scrap of rejected sheet with stabilizer applied, fitted it to the hoop and fitted the hoop to the machine. Off we went, with the same 'A' and the same green thread, following the theory of only changing one thing at a time. 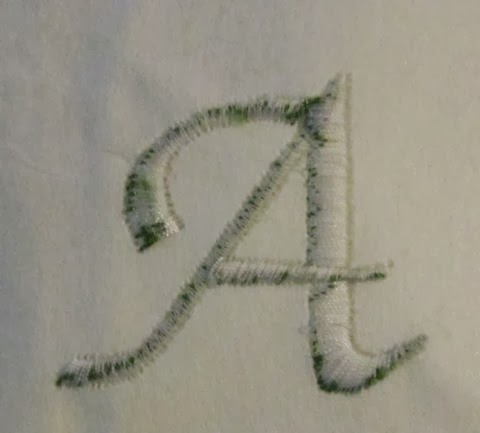 I watched mesmerized as my machine set off on its preprogrammed task and dutifully spelt out an 'A' like a modern day Ouija board.  As far as I could see, it was definitely doing a much better job than before. When it finally finished I felt there should surely be a drum roll as I removed the hoop to inspect the result.

Yes, it was definitely an 'A' and it did look exactly like the 'A' on the small computer screen on my machine, but one thing look very wrong, it was almost entirely white - the color of the bobbin thread, with just a bare outline of the green it should have been.

"my wife ran into this the other night as well with her janome machine while doing some t-shirts. Went through all the tension adjustments, added more stabilizer poor thing was about pulling her hair out. I hate it when I hear grunts and dirty words coming from her sewing room so I tend to pop in and "support" her.

While she was sitting there fuming trying everything she could think of I grabbed the manual and did my technical step by step approach. Turned out that the drop in bobbin was either backwards or the thread had moved when closing the lid and the bobbin thread had worked its way out of a tiny little grove it's supposed to feed through, which of course messed up the tension."

So I pulled the bobbin out of its housing and, following the step by step instructions and accompanying diagram in the manual, carefully replaced it.

Once again I found a new spot in my sample fabric, placed it in the hoop and set the machine off on its merry way. 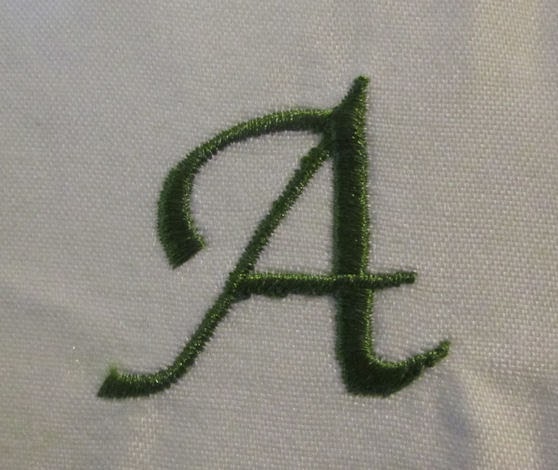 Just look at the 'A' I finally got! I was so happy. I realize this is just the beginning, and I admit it took way too long to get to this point, but now I am ready to start on something more complicated.  Luckily the rejected sheet is a queen size, so I have a whole lot more samples to work through before I go back to my t-shirts, but I will get there!
Posted by Aideen at 2:01 PM