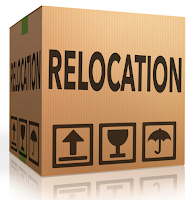 This is something people who live in the US tend to do a lot, however, they mostly relocate between States, not countries. While there can be huge differences in everyday life between States, given how enormous the US is, varying climates and cuisine (I wrote about some of the differences in cuisine here) and a variety of imported influences, there are still less unexpected differences than experienced when moving between continents.

As I mentioned in my book, Peeling the Onion, I had not expected to encounter a language barrier when I moved to the US from Ireland, where English is the first language—but I was surprised (read my blog here about that).

Almost 28 years later I still get caught out by language occasionally, when I use an expression and see blank faces, I realize I have used an 'Irishism' and it has not been understood, so I then have to explain myself. I can't tell you how often I have seen that blank face and said "oh, you don't say that here, do you?"

But there are other things that are also unexpected and can be difficult, particularly if you are past your prime when you relocate, as I was—habits of a lifetime are hard to change, and that is always assuming that you are aware that they are considered 'wrong' in your new location, or just not understood, or worse, misunderstood.

Take for instance date formats (this from W3)

Weights: luckily there are many calculators online, (this is one), as in Ireland weight is expressed in ounces and pounds up to 14 pounds, which is 1 stone. In France, for instance, they are fully metric.

Measures: just about everything you care to measure is different
Distance and Speed Limits:

Pints: there is no way that I could have figured all this out without Google:
Here is another site I use (Check Your Math)

Clothing: I still have to google these conversions, particularly shoe sizes when I am buying shoes to send to my grandchildren in Europe—and even then, it depends of whether I am sending to France or Ireland—because they are not even the same. Here is another cool website for this information.

In order to work, I had to get my US driver's license, so I had to quickly learn the rules of the road differences—all way stops were the most scary. Turning right on a red light - that just felt wrong and still does. School zones and School buses, all rules that don't exist in Ireland and all needed to be mastered before I could take the driving test.

Even more significant is the fact that in Ireland we drive on the left, therefore the driver's seat (and associated controls) are on the right. In Ireland, particularly when I was learning to drive, but even today automatic transmission is extremely rare. Everyone who owns a car, drives a manual shift—and not everyone owns a car as public transport is extremely good (see this blog) and cheap, plus it is almost impossible to find free parking anywhere in major cities. When I first arrived in the US, I bought a car with manual transmission—sat on what I considered the wrong side of the car, and it took me weeks to stop clutching at the door handle in search of the gear shift, which of course is on the left of the driver in Ireland, but on the right in the US. At the same time I had to concentrate very hard to remain on the correct side of the road, multi lane junctions and U-turns were the most difficult as I got somewhat disorientated while negotiating these. I still have to think before I get into a car, in case I climb into the wrong side. What is kind of pathetic is that I also have to do that in Ireland now.

Once again, weights & measures come in—in Ireland gas (which is called petrol) is purchased by the liter (spelt litre), here it is gallons.  Consumption is kilometers per litre in Ireland, miles per gallon here. And if all that is not confusing enough, speed limits are posted in Ireland as Kilometers, here it is normally miles, however, in South Dakota there are signs displaying both.

Then you have the problem of spelling. I used to be quite good at spelling, but since I came to the US my spelling has gone to pot, both in UK and US English. I found this website to help me.

There are also differences in pronunciation of some words on either side of the Atlantic, as well as between States, particularly Southern States have a law of their own, quite separate from accents. I will give you a few examples:

And what is worse I still get jeered for what Americans consider my mispronunciation, not just teased, seriously—jeered. There was the occasion (and I may have written about this one before—because it still annoys me when I think about it) when helping out at a Haunted House set up I was asked to get some Duct Tape from the supplies. I waited in line while a geeky type dealt with each person's request. When my turn came, I asked for duct tape—my Irish accent apparently made it sound like I said 'duc' tape' and he pretended to not understand what I was saying and made me repeat myself multiple times, then said in an extremely condescending tone 'In America we call it duct tape' and gave me a roll of tape.

Finally, while I love my life here, there is still that feeling of having left a part of me behind—which of course I have done, and I don't just mean family, I mean a part of my life, my past—the familiarity of places where I grew up that trigger memories and emotions. There is no place in the US that was ever part of my childhood, or part of my teenage years. It is hard to explain, but I think this sculpture does it better than any words :

And of course, the Irish have been emigrants for centuries, here is another sculpture that I particularly like—depicting the famine emigrants.