I have written about her a few times, on how she turned her back on us for no apparent reason, and later, when a wave of grief hit.

Memories of her, and of course of Odell, frequently come to mind. I can't shake the compassion I feel for how lonely her last year must have been. I suppose that is understandable, considering she lived with us for eight years, the first two of which were Odell's last two years, spent at the memory care facility. I published a blog remembering him on his anniversary last October. Now, a full year after Mildred's passing, I decided to celebrate her life in pictures.

Obviously, after knowing her for almost twenty years, and living with her for eight of those, I have a large number of photos of her. The following are just a few of the highlights and low lights of her life since I first met her.

I start with one from way before I met her, this very old photo of Odell and Mildred taken circa 1953. I love this photo. Clearly, I did not take this one, it was from a photo booth. I scanned many of Mildred's old photos and we had them framed for her. I guess her younger son kept them after she passed. 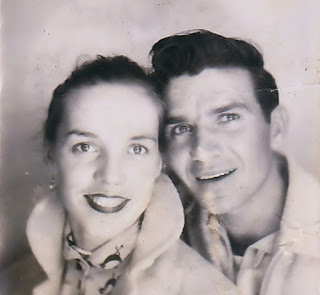 This was the day I first met them, Thanksgiving 2001. Larry and I had married the previous month, they were very gracious considering they were being presented with an unexpected daughter in law. See here for more details of our marriage.

My son and his wife came to visit us and I got tickets to see Dolly Parton. I shared a love of country music with Mildred.

My grandsons visited us from France, Mildred enjoyed having them around and to them she was a great-grandmother.

I bought tickets to see Merle Haggard at the Austin Rodeo, unfortunately I couldn't go due to surgery on my foot but I gave the tickets to Mildred's grandson, Dustin and his wife, Ashley and they took her. Sadly, they didn't get any photos of Mildred enjoying that concert.

My good friend Shelly brought her massage chair to our home every couple of months and we all felt the better for it.

Mildred had a problem with her eyes constantly weeping, the surgery helped a lot.

As everyone knows by now, we went out to eat every Friday and often on Saturday too. Mildred enjoyed these outings and even had an occasional margarita.

This was a bad year for Mildred. she suffered from a nasty cough which lasted way too long, she went to the doctor and he admitted her to hospital immediately. It was touch and go for a couple of weeks, but slowly she recovered. After five weeks between hospital and nursing home recovering, she finally returned home.

It was around this time that I noticed she was losing her sense of humor and becoming more difficult to deal with.

This was the last year Mildred lived with us. She used to come out to the lake house at weekends and really enjoyed it at first. Later she refused to come, or go anywhere really.

Mildred spent the next 14 months in a retirement home, isolated from everyone, due to the COVID-19 pandemic. She didn't have her kindle anymore as she had no internet access there, even if she had her kindle, she needed technical support from me on a regular basis to keep it working and that would not have been possible. She never answered her phone, nor returned our calls.
I still think of her frequently and so many little things remind me of her. No doubt that will always be the case. It is such a shame that she didn't realize how much we cared about her.