When I was telling you about my yoga I mentioned my worthless left hand. I thought it might be a good idea to expand on that in case my experience helps anyone else.

It started out with a constant pain during the day, then it began waking me at night, I tolerated that as long as I could. Finally I went to the doctor. He sent me to a surgeon, Dr Reichel, who explained that the trapezium, a small bone at the base of the thumb, had lost all cartilage and the bones were rubbing together. My options were lots of painkillers or an operation. The operation, ligament reconstruction and tendon interposition (LRTI) involves the following:

Dr Reichel warned me that there was some risk of nerve damage, due to the large number of nerves in the hand, but confirmed that it would relieve the pain. I had no hesitation in going ahead with the surgery.

The surgery went well, the stitches came out and recovery was uneventful. I should add here that I really liked Dr Reichel, he was clearly very passionate about his work and went to great lengths to make sure I understood everything. He also told me that he had taken a photograph during the surgery if I was interested in seeing it. I was! I was fascinated to see it, so he turned his screen towards me. I am not going to post the photo here in case it grosses you out, but if you wish to see it, click here. 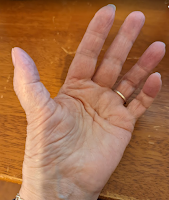 When I returned for a final check up, I mentioned to the surgeon that I had noticed some weird lumps on the palm of my hand. With his usual enthusiasm he checked and told me that I had developed Viking's disease, also known as Duputren's contracture. He explained that this was most common among people from Northern Europe, as the name would suggest. It is hereditary and often appears after surgery, not just hand surgery.
At first this condition was just slightly irritating, but I got used to the lumps on my palm. I was going for physical therapy for my hand and it was obvious that my thumb was not responding well, many of the exercises I was being asked to do were just not possible. The PT, instead of paying attention to why I was unable to do as she asked, she became irritated as though I was just not trying. She eventually discharged me despite the fact that it was very obvious that the bottom joint in my thumb was not working as it should. If only I had used the same PT I later found for my shoulder. 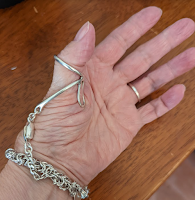 Some months later, despite following the exercises given to me by the PT, my hand was not working as it should. I have to say, the pain was gone. I returned to my surgeon who recommended that I see a hand specialist, which is what I should have done instead of generic PT. Whitney Marshall in Cedar Park was incredible. She fitted me for a Silver Ring Splint. This device supports and encourages the thumb joint to do some of the work expected of it. My hand is still crippled but not painful and with the splint, working to a degree. 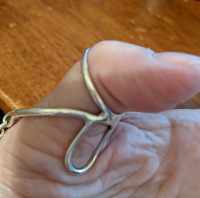 The problem with my thumb now, was the Viking's disease was restricting the joint movement and unfortunately, was slowly working its way through my hand. It reminds me of Alien, as the stringy, lumpy threads spread through fingers and across my palm, restricting movement and slowly forcing my hand into a claw like shape. Obviously, I can't see it actually move—though that would be cool—but I can see where it is expanding into my fingers and across my palm.
It was when I started doing yoga that I noticed that I couldn't flatten my palm and not only was my little finger curling inwards, the ring finger was starting to also. That made me more aware of my hand and then one day, I noticed that I was holding my left hand in a fist—because that was how it was most comfortable. Now on top of my treadmill and yoga exercise, I will have to incorporate specific exercises to stretch out my hand or I will end up with it permanently in a fist.
If you happen to be a weirdo like me, you might be interested in this YouTube video of an actual surgery (not mine). I find it fascinating.
Posted by Aideen at 10:51 AM