I have frequently shared John's blog posts so you may be familiar with him, or at least with the fact that I follow his blog. I also follow him on Twitter, and on Amazon.

I love his writing style and his attitude. Up to now though, I have not purchased any of this books. The only reason being that I am not religious; his books are religious, though far more than that. I don't consider myself to be a Christian, although I was born into a Catholic family. I separated myself from religion and from Christianity fairly quickly. The nuns started the rot. I have written a couple of blogs about that! At first I tried. I read the Douai bible from cover to cover, I also read the King James bible - though to be fair it was a very old edition. I wrote a blog about that particular bible, nothing to do with religion, but a lot to do with the old family bible being returned to its home, mainly thanks to my son's detective work. I really liked that story. I was confirmed in both the Catholic and the Methodist churches before finally giving up.

My observations of human 'kind' caused the rot to spread and the Christianity I discovered in the US cemented it (can you cement rot?). I firmly believe that people are inherently bad, the few like John Pavlovitz, are rare. I have been lucky enough to have met some, but they are still only a very small proportion compared to the many evil people I have known and observed. 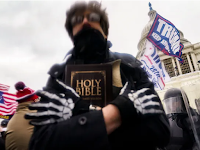 Too many people claim to be Christians and then proceed to display what I believed to be absolutely unchristian behavior; I have to pause and wonder, is my understanding of Christianity wrong, or has it changed. Love thy neighbor, to most Christians, appears to mean 'you love ME', but not the other way. I have met Atheists, Hindus, Muslims, Buddhists and Jews who show more humanity that so called Christians claim is part of their beliefs. Of course, that is not to say there are no evil people among every cross section of society - perhaps all religions have their version of the Taliban or White Supremacists. That is why I refuse to embrace religion. I believe that everyone is entitled to believe whatever they please, and practice whatever they believe so long as it doesn't hurt others. Just leave me out of it. Religion is just an excuse to be an asshole.

But this week I bought and read John's latest book. 'If God is Love, Don't be a Jerk'. I did so because John posted on Facebook that he was about to have brain surgery and would not be able to work on launching his new book. He asked his FB followers to buy it, review it and help get the word out there. So I did. As my review on Amazon states, I did skim over the sections that were just too much Jesus for me. But still, I enjoyed it. Of course, John's writing style and viewpoint makes it hard to not enjoy whatever he writes. and his sense of humor is always present. I also did not remove a star because I found the Jesus references too much, I was not being forced to read it and I respect his right to believe - as I already mentioned.

Here are some snippets I particularly liked.

"If you've evolved or matured or progressed in some fundamental way, you know that there's a grieving in that growing and outgrowing, in losing some of the old story, the security of that story, the sense of self that story gave you"

"You cannot be fully pro-life and uphold your supremacy based on color, geography, or religion"

I particularly love in Chapter 9, he relates how he accidentally watched a 3-D movie wearing his sunglasses instead of the supplied 3-D glasses to demonstrated the idea "The lenses through which we view the world matter".

My main takeaway is that the author is experiencing enormous pain, emotional and intellectual. As am I. However we are experiencing it from opposite sides of the concept of Christianity. He believes in a god, he believes in Christ and he is a good person and his psyche is hurting because so many people who claim to believe as he does, who profess to be Christian, are destroying all that he loves and cherishes about Christianity. I look at these same people and see it as proof positive that I was right to turn my back on the doctrine that the nuns tried to brainwash me with, a doctrine that says we are right and everyone else is wrong. I firmly believe that everyone is entitled to believe whatever they wish. I also think these beliefs should be private. No one should have the right to force their beliefs on others. No one should be persecuted for their beliefs.

If you are a Christian, I highly recommend this book.